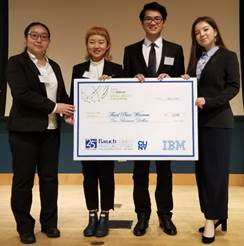 A team of four students from the Zicklin School of Business captured third place in the 2019 CUNY-IBM Watson Social Impact Challenge on May 3 with their project that demonstrated how applying artificial intelligence can reduce subway delays.

Bachelor of business administration students Yao Qian (’19, Soo Rim Kang (’19), and Anastasiya Uraleva (’21), along with Dean Yu (’20) who is in the Master’s of Science in finance program, worked together to compete against more than 200 students from 19 campuses to win $2,000 for third place.

This year, Baruch had 74 students, representing 45 percent of the participants, sign up for the annual competition.

“All the students who completed the CUNY IBM Watson Social Impact Challenge demonstrated the skills they need to be successful in the 21st Century -- critical thinking, complex problem solving, technological literacy and research skills to name a few,” said Stan Altman, Ph.D, professor at the Marxe School of Public and International Affairs, who is the lead organizer of the program.

Professor Altman added, “All the teams showed how big data and machine learning can be effectively applied to create innovative solutions to some of the complex problems facing our society.”

The students focused on the New York City Transit (NYCT). Their research found that the agency is in a state of emergency, estimated to reach a critical operations deficit by 2021.

Their project – Watson Predictive Maintenance – looked at how the NYCT maintenance department can utilize IBM Watson artificial intelligence to design schedules that would reduce subway delays.

Qian, who comes from China, wanted to work on a project to fix what she disliked the most about New York City: the subways.

“In China, the subways are really clean and on time. Because the New York subways began operating underground a hundred years ago, they should be keeping the pace with the development of the present times, and artificial intelligence is a great tool to combine with their old systems,” Qian said in a video interview after her presentation.

Currently, NYCT maintenance workers rely on a fixed maintenance schedule with a set timeframe for replacements and repairs. In their final presentation, the students said a contributing factor to delays is that “machinery failures cannot be predicted ahead of time, while those that are still usable are often replaced.”

To fix this problem, the students proposed that the NYCT use an upgraded transit maintenance system that draws on Watson’s machine learning, discovery, assistant and studio tools, enabling advance prediction of machinery failures and giving workers more accurate troubleshooting diagnostics.

Baruch College’s Marxe School of Public and International Affairs administered the three-month long competition, along with support from IBM and The Lawrence Field Center for Entrepreneurship at Baruch College. The Mayor’s Office of the Chief Technology Officer, the NYC Department of Health & Mental Health and the NYC Administration for Children’s Services also participated.

Starting in February, 210 students representing 19 City University of New York (CUNY) schools signed up to participate in the event. The three-month competition included information sessions, workshops, and a two-day boot camp that participants had to complete.

Teams were made up of three to five students who submitted case statements and one-minute videos of their projects aimed to think about how they would apply cognitive computing to improve how institutions of higher education or local governments can better serve the public.

On May 3, the 10 finalist teams (36 students) made a five-minute PowerPoint presentation to a panel of judges drawn from diverse fields in government, education, and private industry. Below are the other competition results: