GETTING DOWN TO BUSINESS
Baruch College in the City of New York, 1847-1987

The Thirties and Forties: Growth and Conflict (pp. 29-53) 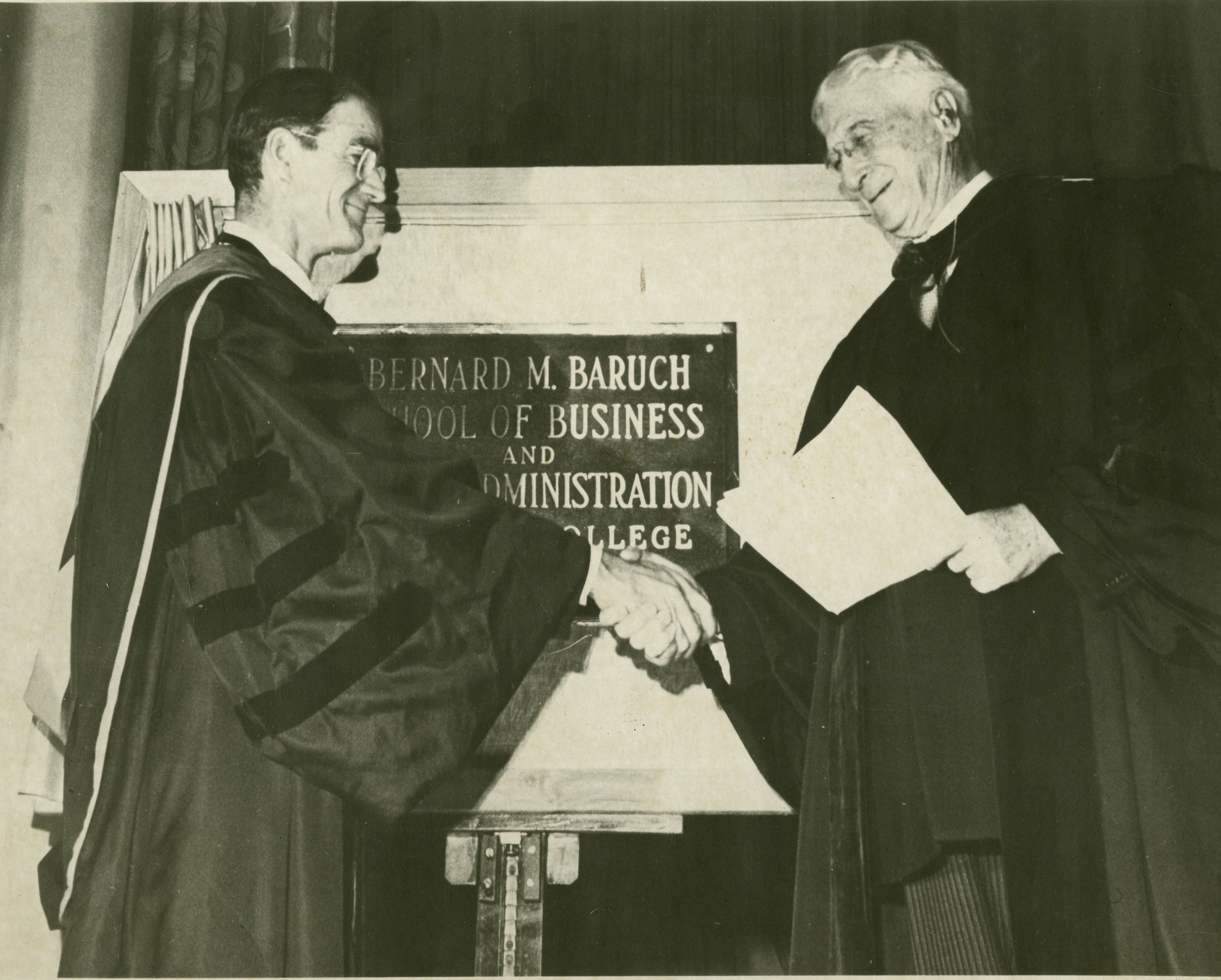 GETTING DOWN TO BUSINESS
Baruch College in the City of New York, 1847-1987

Contributions to the Study of Education, Number 32

British Library Cataloguing in Publication Data is available.
Copyright © 1989 by Selma C. Berrol
All rights reserved. No portion of this book may be reproduced, by any process or technique, without the express written consent of the publisher.
Library of Congress Catalog Card Number: 88-25065
ISBN: 0-313-26401-5
ISSN: 0196-707X

Printed in the United States of America
The paper used in this book complies with the Permanent Paper Standard issued by the National Information Standards Organization (Z39.48-1984).
10 987654321

This book is dedicated to Baruch students— past, present and future

Any history of public higher education in New York City must depend on S. Willis Rudy’s detailed study of The College of the City of New York (New York: City College Press, 1948) and certainly a history of Baruch College, which was part of City College until 1968, must do so. Rudy’s book is essential for the first century of City College history. Two dissertations—Florence Neumann’s “Access to Free Public Higher Education in New York City, 1847—1961” (unpublished Ph.D diss., City University of New York, 1984) and Sheila Gordon’s “The Transformation of the City University of New York” (unpublished Ph.D diss., Columbia University, 1975)—are important for recent years. Sherry Gorelick’s City College and the Jewish Poor (New Brunswick: Rutgers University Press, 1981) must be consulted but should be used with caution. The Marxist determinism of the author mars an otherwise valuable study.

Secondary works of any kind were used sparingly. As the notes show, this first history of Baruch College was largely constructed from the records of faculty meetings, college publications, correspondence of the principals, a few interviews and a very large number of reports. At times it seemed that the School of Business and Public Administration was the most studied institution of higher learning in the nation. In addition to the reports of the various accrediting agencies that visited 23rd Street, there were innumerable studies by faculty committees and more than a few by deans and other administrators. But this is not all. Because the School of Business was a source of worry to City College, City Hall and the Board of Higher Education, it was endlessly examined. The most important of the outside studies, “Education for Business in the City University of New York,” was done by Donald Cottrell and J. L. Heskett in 1962. In this report, Cottrell, the dean of the school of education at Ohio State University, revealed the manifold problems of the School and prepared the way for its separation from City College six years later. As one would expect, there are numerous copies of the “Cottrell Report” in the Special Collections of the Baruch College Library

The value of the primary sources varied with the period under examination. Faculty minutes in the turbulent sixties, for example, were much more revealing than they were in the calmer eighties. Ticker, the day session student newspaper, was far more interesting in the thirties than later. The three-decade run of the “Faculty-Staff Newsletter” and its successor, Baruch Today, however, was consistently valuable because each issue reported on everything of importance that occurred at 23rd Street.

With only a few exceptions, indicated in the notes, the primary sources on which this book is based, whether labeled City College, College of the City of New York or Baruch College, are in the library of Baruch College. Unless otherwise indicated, they are memorandums, correspondence, reports and typescripts of minutes, sometimes in binders or folders, sometimes simply loose items. Much of the material was deposited in the library by Dean Emanuel Saxe when he retired in 1968. As a result of neglect, the documents are somewhat the worse for wear and not well organized. At present, they are in cardboard cartons in rooms 524 and 525 in the college annex at 155 East 24th Street, and will hopefully be organized into a more usable archive when the library moves into its new quarters on East 25th Street. Until that happens, researchers will need to call on the reference library staff for assistance.

Bound items such as the Bulletin, Lexicon, and Proceedings of the Board of Higher Education or its City College Committee, as well as the Cottrell, Holy and Strayer reports, are in the Special Collections of the Baruch Library and are listed in the library’s catalog. The Ticker and Reporter are on microfilm in the periodicals section of the library. Much, but not all, of the material for the years prior to 1968 is also in the well-organized City College archives where a well-informed archivist can be of great help. A few items relating to Baruch are at the Board of Higher Education headquarters at 525 East 80th Street.

Readers will note an inconsistency regarding the listing of page numbers for the “Faculty Minutes”: from 1932 to 1939 and since 1968, pagination is not sequential. Since the minutes of a given meeting, whether of the General Faculty or a given School, are usually brief, page numbers are not given for minutes produced in those years. This is also true for the student press, where an issue rarely exceeded four pages.

Special circumstances required research in special sources. The aborted attempt to establish a College of Commerce under the auspices of the New York State Chamber of Commerce in 1913 is a case in point. The Chamber’s Proceedings, like those of the Board of Higher Education and its subcommittees, were quite useful for crucial moments in Baruch history. Open Admissions, a practice adopted by all units of the City University in 1970, led to a mass of evaluations that shed light on the changing student body at Baruch in the seventies. At present, annual reports from the office of Institutional Research at Baruch provide valuable information about today’s students.

When first planned, this book was expected to depend heavily on interviews with the many Baruchians who were witnesses to the development of the School of Business and Baruch College. As it turned out, interviews proved useful mostly as a supplement to the abundant documents that were available. Three taped sessions with Emanuel Saxe were invaluable, and one with Herman Singer, the editor of Ticker in the thirties, proved most interesting. Preliminary discussions with other potential interviewees, however, indicated that few possessed Saxe’s balance and knowledge; and, given the restraints of time and the richness of the documents, telephone conversations on specific points with knowledgeable experts sufficed.

A final reason to bypass extensive formal interviews was the fact that for the past twenty years, as chairperson, administrator and member of faculty committees, the author has been an active participant in the life of the college. She hopes the book has been enriched by her personal knowledge. To guard against lack of objectivity, however, the chapters were read and criticized by several Baruch veterans, a measure that served to indirectly utilize the accumulated knowledge of others.