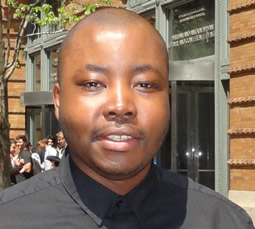 Ennin is majoring in Computer Information Systems and will spend the summer studying Mandarin in China at Peking University. In the fall, he will study at the University of International Business and Economics in Beijing.

“Being a recipient of the NSEP/David L. Boren Scholarship means a lot for my professional as well as my personal development,” says Ennin. “I envision having a career in business and international development in an information technology capacity. So the scholarship affords me the opportunity to study abroad in Beijing which has emerged as the epicenter of immense development.”

Ennin, who is originally from Ghana, says he selected Baruch for what the College offers. “I chose Baruch as my institution of higher education because it offers the strongest programs and resources such as scholarships and career counselling for the fields I am interested in, and at a cost that I would be able to afford.”

Ennin says he hopes to complete his service requirement at either the U.S. Department of State or the United States Agency for International Development and work overseas using the language and cultural skills he acquires while studying abroad.

Baruch College is a senior college in the City University of New York (CUNY) with a total enrollment of more than 18,000 students, who represent 164 countries and speak more than 129 languages. Ranked among the top 15% of U.S. colleges and the No. 4 public regional university, Baruch College is regularly recognized as among the most ethnically diverse colleges in the country. As a public institution with a tradition of academic excellence, Baruch College offers accessibility and opportunity for students from every corner of New York City and from around the world.  For more about Baruch College, go to http://www.baruch.cuny.edu/.