Ranking highlights Baruch as a best value for social mobility 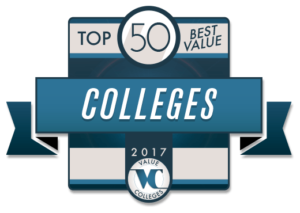 Value Colleges cited Baruch as “one of the best-connected institutions in the city of New York, as well as one of the best values for social mobility.” Baruch College was praised for its ability to provide a high-quality, low-cost education to students. “Baruch’s combination of reasonable tuition and excellent career prospects have made it a trustworthy name for return on investments; graduates can count on a strong showing on the job market.”

Baruch has consistently been recognized for providing an affordable education. This month, U.S. News & World Report ranked Baruch College #2 for Least Debt among Regional Universities in the North, and #3 when looking across all regional universities in the country. Recently, Washington Monthly named Baruch among the top ten “Best Bang for the Buck” schools. Earlier in the year, Baruch was also named as an institution that does the best at graduating low-income students in a report released by the U.S. Department of Education.