Baruch College Recognized by the U.S. Department of Education as Excelling in Access to Affordable Education and Student Success 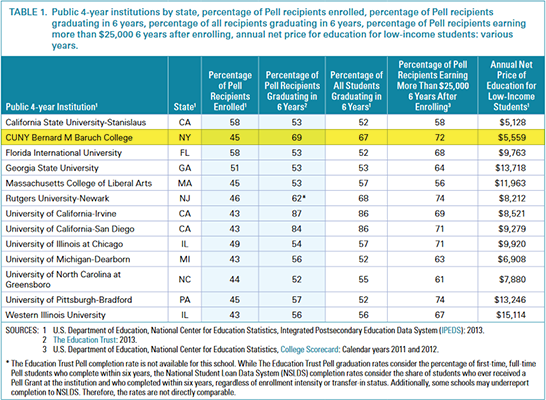 NEW YORK, NY - March 28, 2016 - Baruch College has been named as one of the institutions that does best at graduating low-income students. According to a new report released on March 24, 2016 by the U.S. Department of Education, 45% of Baruch College students are recipients of Pell Grants with a graduation rate of 69% of these students within six years. Other highlights include: 72% of Pell Grant recipients at Baruch earn more than $25,000 six years after enrolling at the college and an annual net price of $5,559.

This is not the first time that Baruch College has outperformed its peers on providing an affordable education. Baruch previously ranked #1 in CollegeNET’s Social Mobility Index and was named “Best Bang for the Buck” by Washington Monthly.

For its methodology, the U.S. Department of Education looked at data available from both the College Scorecard and The Education Trust’s Pell Partnership Project. For a full explanation of their methodology, see here.

Baruch College is a senior college in the City University of New York (CUNY) with a total enrollment of more than 18,000 students, who represent 164 countries and speak more than 129 languages. Ranked among the top 15% of U.S. colleges and the No. 4 public regional university, Baruch College is regularly recognized as among the most ethnically diverse colleges in the country. As a public institution with a tradition of academic excellence, Baruch College offers accessibility and opportunity for students from every corner of New York City and from around the world. For more about Baruch College, go to http://www.baruch.cuny.edu/.