Baruch College Presents "The Return: A Documentary About Being Young and Jewish in Poland" Screening and Discussion with Director Adam Zucker 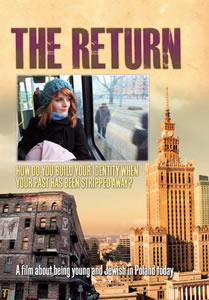 NEW YORK, NY - November 5, 2015 - The Wasserman Jewish Studies Center at the Weissman School of Arts and Sciences at Baruch College presents a screening of “The Return: A Documentary about Being Young and Jewish in Poland” followed by a discussion with director Adam Zucker on Thursday, November 12 at 12:30 p.m.

How do you build your identity when your past has been stripped away? With no access to their heritage, four women are forging a new sense of self. In the country that was once the epicenter of the Jewish world, and now regarded as “the Jewish graveyard,” they are figuring out how to be Jewish in today’s Poland.

This event is free and open to the public. To RSVP for this event, please contact the JSC at jewish.studies.center@baruch.cuny.edu

WHAT:     “The Return: A documentary about being young and Jewish in today’s Poland”

WHERE:   Baruch College - The William and Anita Newman Vertical Campus

Baruch College is a senior college in the City University of New York (CUNY) with a total enrollment of more than 18,000 students, who represent 160 countries and speak more than 100 languages. Ranked among the top 15% of U.S. colleges and the No. 4 public regional university, Baruch College is regularly recognized as among the most ethnically diverse colleges in the country. As a public institution with a tradition of academic excellence, Baruch College offers accessibility and opportunity for students from every corner of New York City and from around the world. For more about Baruch College, go to http://www.baruch.cuny.edu/.