Only U.S. College Participating with Nine Universities from Around the World 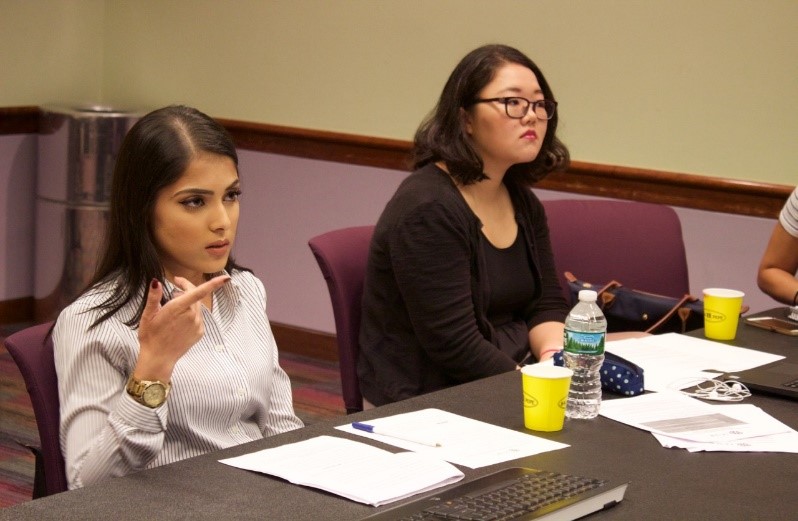 (L to R) Tanzila Mahmood, a political science and history double major, and Hanxiao (Helen) Yue, an economics major, presented their projects at the 2017 International Conference of Undergraduate Research at Baruch.

New York, NY− September 28, 2017 - For the fourth consecutive year, Baruch College hosted the International Conference of Undergraduate Research (ICUR), which was held on September 26 and 27. The conference linked more than 300 students from nine universities, located in eight countries on five continents.

More than 20 Baruch College undergraduate students presented at the fourth annual two-day conference, where HD video-conferencing technology made it possible for them to discuss their research from the Baruch campus linked in real time to an international audience. On linked panels of students from participating global universities, Baruch undergraduates spoke about their own research, heard presentations from foreign peers, and engaged in dialogue about their work.

“This global, academic conference gives Baruch College a special way to celebrate undergraduate research that is unique in the United States,” said Katherine Pence, PhD, chair of the Department of History at the Weisman School of Arts and Sciences, and Baruch’s ICUR coordinator. “It also provides students with a platform to showcase their high-level research to an international network of student scholars.”

This year, Baruch student research covered a wide range of topics from U.S. policy toward refugees to volatility in U.S. equity markets to genes and hormones in fruit flies to the history of feminist nationalism in Ireland.

“It’s exciting to see more and more Baruch College students eager to participate,” said Pence. “In 2014, we began with two presenters and the number of participants has jumped to nearly 25 in fewer than three years. The increasing number of participants speaks to the ambition and intellectual curiosity of our student body.”

According to Professor Pence, the ICUR experience helps prepare students in multiple ways as they look to embark on a career path or enroll in graduate school after obtaining an undergraduate degree.

“The conference provides an opportunity for students to sharpen their communications skills, speak with confidence to a diverse global audience, and it also encourages them to consider perspectives that may be very dissimilar from their own,” added Pence.

Led and sponsored by the University of Warwick in the UK and Monash University in Australia, the goal of the conference is to challenge “undergraduate students to rethink their work in an international context” and it “requires the presenters to consider the perspective of students from different backgrounds.” Since its inception in 2013, more than a 1,000 students from 11 institutions have presented their research at the annual conference.

This year, the conference at Baruch College was made possible through support by the Office of the Provost, the Weissman Dean of Arts and Sciences, and the Marxe Dean of the School of Public and International Affairs.