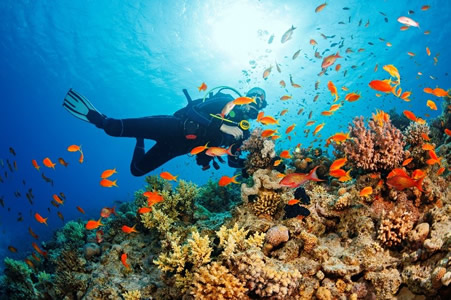 NEW YORK, NY- June 28, 2016– Did you know oceans cover 70% of the earth’s surface and produce more than half of the world’s oxygen? But according to the World Wildlife Fund, many sea animals including turtles, whales, tuna, and dolphins are endangered.

With summer upon us and June marking National Oceans Month, it’s the perfect time to learn more about our oceans - and how to protect this vital natural resource. Noted ocean explorer and marine biologist David Gruber, an assistant professor of biology and environmental science at Baruch College, travels around the world to explore the mysteries of underwater ocean life. Yet you don’t’ have to be a scientific researcher to help protect our oceans and sea life, notes Dr. Gruber. Everyone, including children, can do their part.

From Bait to Plate: Know where your seafood is coming from

Americans love eating seafood. In 2009 (the last year for which data is available), we consumed 4.833 billion pounds of seafood - that’s approximately 15.8 pounds of fish and shellfish per person, according to the National Oceanic and Atmospheric Administration (NOAA). Yet most people know very little about where their seafood was caught - and how. So, for your next meal, only purchase from sustainable fisheries. This is the single most important thing people can do, explains Dr. Gruber, since the largest power the public holds is their purchasing power. Buy food and other resources from the ocean that you know has been harvested in a sustainable way and non-harmful way. Keep up on which fish are endangered. For example, overfishing has resulted in an historic and alarming 97 percent decline in the population of Pacific bluefin tuna. If the trend continues, experts warn the species could become extinct.

Explore our great big natural world - from your backyard to a local park to faraway places. Many organizations and travel companies offer environmentally friendly and nature-focused vacation trips. Even an hour hike outside helps you connect to nature. Share your respect for nature through social media and conversations with friends and family.

Limit Use of Old-School Plastics

Each year, tens of thousands of marine animals are entangled and killed by plastic. Currently, around 275 million metric tons of plastic is generated annually. Of this, 4.8 to 12.7 million metric tons of plastic make it into our oceans and contribute to habitat destruction. With a little thought and a bit of effort, you can limit the plastic in your life. Carry a reusable water bottle, store food in non-disposable containers, bring your own cloth bag when shopping, buy sustainable products, and recycle whenever possible.

Get involved locally and globally! Support scientists and marine biologists working to understand sea animals. Share links to conservation organizations in your social media. Keep up on the latest news about endangered species, conservation measures, and research. The NOAA is a terrific resource for information. Learn about exciting new developments in ocean research, such as Dr. Gruber’s “shark-eye camera.” The invention works to understand animals from their perspectives - and it help us connect to their underwater world. See news article here.

David Gruber is an associate professor of Biology and Environmental Science at Baruch College’s Weissman School of Arts and Sciences. Dr. Gruber has been a producer for WNYC Studio 360’s “Science and Creativity” series and he has written articles for The New Yorker, Nature Medicine and The Best American Science Writing 2007. A former tropical forester for the Smithsonian Tropical Research Institute, Gruber’s research utilizes Remote Operated Vehicles and extended-range SCUBA to examine marine natural products, fluorescent proteins and bioluminescence on coral reefs.

Gruber is the co-author of Aglow in the Dark: The Revolutionary Science of Biofluorescence (Harvard University Press, 2006), and he is currently co-producing an IMAX film on bioluminescence.

Baruch College is a senior college in the City University of New York (CUNY) with a total enrollment of more than 18,000 students, who represent 164 countries and speak more than 129 languages. Ranked among the top 15% of U.S. colleges and the No. 4 public regional university, Baruch College is regularly recognized as among the most ethnically diverse colleges in the country. As a public institution with a tradition of academic excellence, Baruch College offers accessibility and opportunity for students from every corner of New York City and from around the world.  For more about Baruch College, go to http://www.baruch.cuny.edu/.