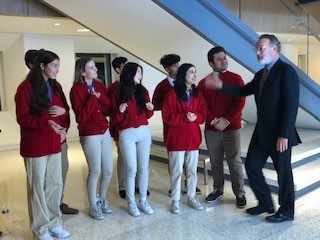 Tom Hanks, starring as Mr. Rogers in A Beautiful Day in the Neighborhood, welcomes Baruch’s Blue Notes at the movie premiere on Nov. 16

The Blue Notes, Baruch’s a cappella singing group, got close to Hollywood royalty last month when they performed on the red carpet at the New York premiere of A Beautiful Day in the Neighborhood on Nov. 16. The film stars Academy Award-winner Tom Hanks as Fred Rogers, the beloved host of Mister Rogers’ Neighborhood, the iconic kids’ TV show that debuted in 1968 and aired its final episode in 2001. The Blue Notes sang the film’s title song and met Hanks and Rogers’ widow, Joanne.

For Raphael Berdugo (‘21), an economics major in the Zicklin School of Business, the group’s experience was exciting, especially the unexpected interactions with Hanks and Rogers.

“Tom Hanks was kind enough to sing along with our performance as well as singing the closing song of Mr. Rogers’ show [“It’s Such a Good Feeling”]. Our exchange with him was short, yet sweet,” said Berdugo. “The most unique part of the experience was meeting and interacting with Joanne Rogers, who was lovely with our group, stopping multiple times throughout the evening to listen to us sing.”

The Mr. Rogers film opening isn’t the first time The Blue Notes hit the red carpet – they sang for the premieres of the popular movies Pitch Perfect 2 and Pitch Perfect 3. The group’s advisor Fred Burke, director of the Zicklin School’s Graduate Career Management Center, landed the coveted invitations to help the group showcase its talents.

Rebecca Dhala (’21), who majors in music with a specialization in management of musical enterprises at the Weissman School of Arts and Sciences, has been in the group for three years and is now its president. Dhala noted that students don’t need singing or music experience to join. In fact, most members started out not having much experience and are now able to read sheet music.

“There is really a familial atmosphere – we make music together and we hang out outside of the group,” said Dhala.

Chansong Kim (’22), a Zicklin student majoring in human resources management and the group’s marketing chair, has played piano for 15 years. The Blue Notes is her first experience singing a cappella.

“I found it so unique that not all of the members were music majors and the majority of them were actually passionate about business, government, etc.,” Said Kim. “It's really amazing to see many people with very different backgrounds become connected through music in the little time we have for rehearsals.”

The Blue Notes have performed at Baruch College’s Convocation, the Commencement Ceremony at the Barclay’s Center, the annual Bernard Baruch Dinner, Engelman Recital Hall in the Baruch Performing Arts Center (BPAC), and for many other events on campus.

Last semester, the group was invited to perform with a cappella groups at New York University, and Dhala hopes the group will enter competitions in the spring.

Upcoming Event: Catch The Blue Notes on Dec. 11 at 6 p.m. at BPAC for their last concert of the fall semester.