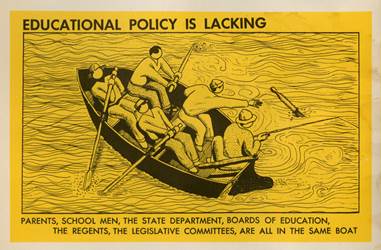 Newly digitized by Baruch College, image from the IPA Collection: “The New York Primer,” a 1939 picture book on school problems, by Luther Gulick and Rudolf Modley, founder of Pictorial Statistics

At a time of widespread disdain for government and public service, the new online archive, funded by Carnegie Corporation of New York, offers fresh insights into model operations of local and national governance in America.

Founded in 1906 as the Bureau of Municipal Research, the IPA with its motto, “An Adventure in Democracy,” represented a revolt against systemic national and local municipal corruption at the dawn of the 20th century, a revolution fostered by titans like Andrew Carnegie, E.H. Harriman, and John D. Rockefeller Jr., and masterminded by a pioneer of public administration, Luther Halsey Gulick III.

For several years, archivists from the College’s William and Anita Newman Library have been processing and digitizing thousands of pages of city records, files, memorabilia, historic photos, and other documents—most of which have never before been seen by the public.

This new digital library features 175 reports from 1920 to 1959, as the first phase of a longer-term effort to make large portions of the IPA collection accessible online to students and scholars. Highlights of the collection include:

• Historic reports on New York City financial problems and commercial trends – including a 1941 study of the soon-to-vanish garment industry – charting the city’s path to world metropolis.

“We have begun by digitizing a series of reports produced by the IPA on a wide range of topics, such as snow removal, police reform, and local governance,” said Professor Jessica Wagner Webster, Digital Initiatives Librarian and Director of the Project at Baruch College. “Researchers can keyword search across the full text of all of these reports, allowing them to locate all the material produced on a specific topic or region. We are thrilled to be able to provide access to these materials, and look forward to continuing to digitize this rich collection.”

This project was made possible through philanthropic support from Carnegie Corporation of New York, whose century-long history of generous support for effective and accountable government enabled Baruch College to begin the preservation, organization, and digitization of the IPA Archive for the benefit of the public, scholars and researchers. The history of the project is told in the Archives’ blog, An Adventure in Democracy.

According to Professor Wagner Webster, the next phase of the project will be the digitization and posting of reports from 1907-1919 as well as records of Luther Gulick’s role in World War II. The public will be able to access and study:

• The investigation that brought down the Manhattan Borough President and established the Bureau of Municipal Research as preeminent crusaders for good government.

• A series of Public Affairs pamphlets dealing with racism, prostitution and other pressing issues.

• Charts showing how Gulick’s refugee organization saved some half a billion war victims.

LUTHER HALSEY GULICK III: THE MAN BEHIND THE ARCHIVE 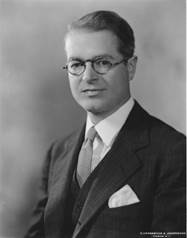 The IPA, and its predecessor organization, the New York Bureau of Municipal Research, spearheaded municipal reform in America at the dawn of the 20th century. Its guiding spirit was Luther Halsey Gulick III (1892-1993), New York’s first City Administrator, who joined the BMR in 1915 and trained alongside future power broker Robert Moses before Gulick went on to head the IPA throughout his celebrated career.

Gulick’s imprint on public administration was legendary throughout the United States and the world. “No question he was the leading reformer of the 20th century,” says Kenneth J. Meier, Distinguished Professor of Political Science and Chair of Liberal Arts at Texas A&M University. Gulick served as a prime consultant to the federal government during World War II, working for the National Resources Planning Board, the War Department, War Production Board, and the Office of Foreign Relief and Rehabilitation Operations. In the 1950s into the 70s, he was involved in numerous international projects, including implementing a national development plan in Iran, saving the flood-threatened monuments of ancient Egypt, and executing new water supply policies in Calcutta, India.

In 2014, more than 700 cartons of IPA files and Gulick’s personal papers were donated to Baruch College. This trove of documents and materials—ranging from a letter to Gulick from Albert Einstein to Gulick’s 1946 credentials for the Nuremberg Trial where he cataloged the evidence against Nazi leaders, and his collection of Depression-era scrip — forms the basis of the IPA collection.

Baruch College is a natural home for the IPA Archive thanks to its long-standing commitment to education in the field of public administration, which began with the founding of its School of Business and Civic Administration in 1919 and goes back to its 1847 origins as the Free Academy, the first tuition-free public institution of higher education in America. Baruch today is proud to include the Austin W. Marxe School of Public and International Affairs, whose 54 full-time faculty will be active users of the collection.

According to David Birdsell, Dean of the Marxe School, “Having the archive on campus is both a tremendous resource and an inspiration. Luther Gulick set a very high bar for careful, evidence-based analysis of policy and administrative practice, decades before these terms came into wide use. Having his work and the broader endeavors of the IPA housed on campus puts us at the very foundation of modern thinking about how government works.”

Scholars and all students of history can immediately access the first phase of the digital collection at www.baruch.cuny.edu/library/ipa.