To make sure everyone has the opportunity to vote in upcoming elections, Baruch College joined a nationwide effort to promote National Voter Registration Day on campus.

Baruch’s Undergraduate Student Government (USG) championed the cause by hosting events on September 24 and 26 where 253 people registered to vote for the first time or re-registered due to a specific reason, such as a change of address.

To keep the “Be #VoteReady” enthusiasm and engagement going strong, the USG will continue its registration efforts by hosting a table on a monthly basis and during large, popular events for students.

WATCH VIDEO: Experience the “Be #VoteReady” excitement at Baruch.

“When going to vote, you know that you have a voice, and that you are able to use it,” she said.

Kimberly Kazdal, USG’s Vice President of Legislative Affairs, added: “Seeing so many people registering to vote at these two events was truly empowering, and it was encouraging that many students were eager to be civically engaged.” 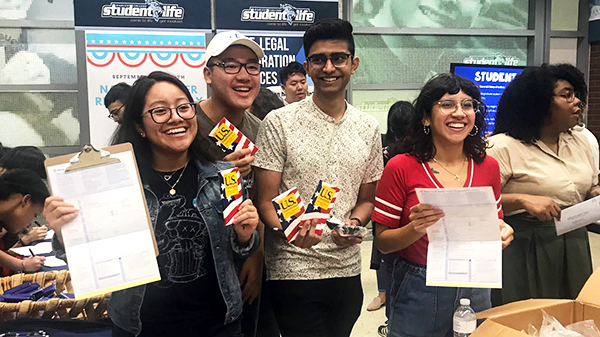 Baruch’s National Voter Registration campaign is being supported by the entire campus community with various departments collaborating with the USG, including Enrollment Management; Student Life; and Communications, Marketing and Public Affairs.

Celebrating the Right to Vote