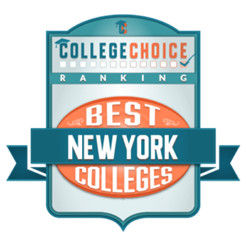 Baruch College was named as one of the “25 Best Colleges in New York” in 2018 by College Choice, ranking #3 among public institutions in the state.

College Choice, an independent online publication, is dedicated to guiding students and their families to find the right colleges. According to its website, the United States is home to more than 3,000 four-year colleges and universities. About 21 million students are currently enrolled in college throughout the nation.

The ranking evaluated private and public schools in the state looking at institutional excellence, student satisfaction, and return on investment. In recognizing Baruch College, the publication highlighted Baruch’s variety of programs, and cited the Marxe School of Public and International Affairs, the Weissman School of Arts and Sciences, and the Zicklin School of Business.

This recent ranking by College Choice adds to the growing list of national recognitions for value and academic excellence. In January alone, The Princeton Review cited Baruch College as one of the “Colleges that Pay You Back: the 200 Schools That Give You the Best Bank for Your Tuition Buck” and Kiplinger’s Personal Finance ranked the school to its "Top 300 Best College Values of 2018".

Methodology: To develop this list, College Choice looked at academic quality along with return on investment, the differential between tuition costs and average early career earnings. For more information, read here.