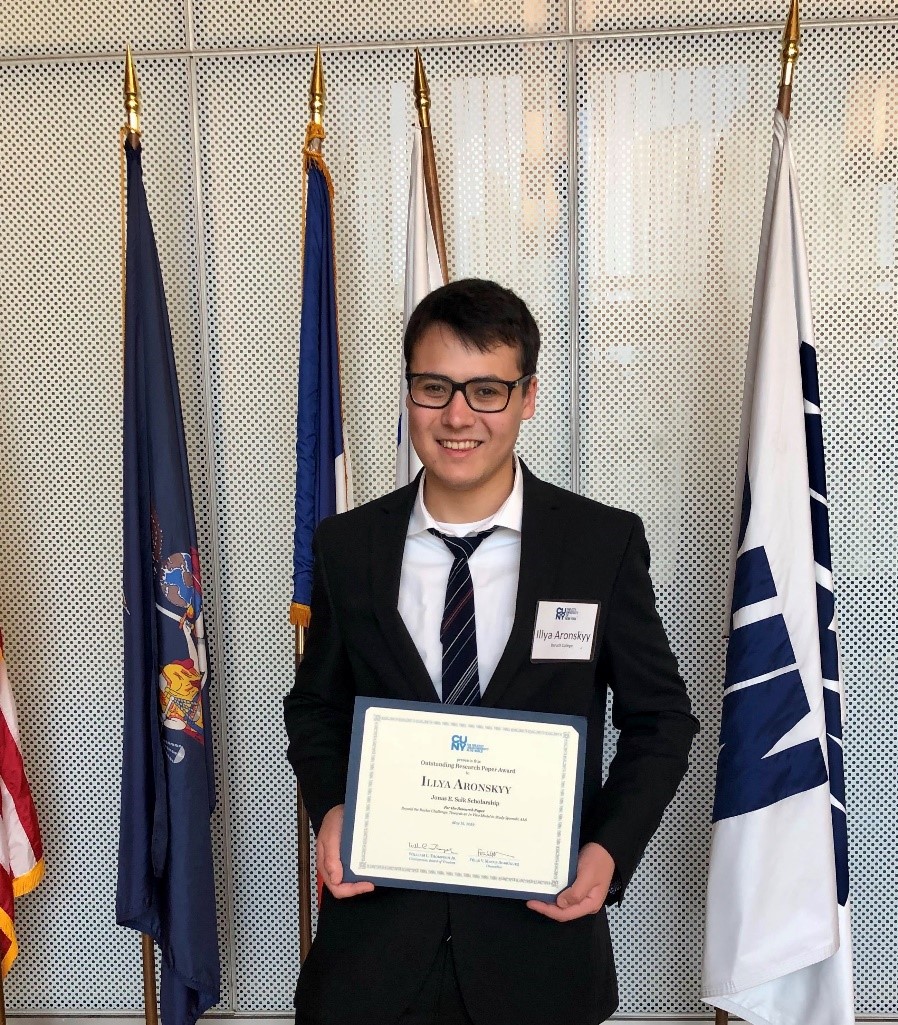 Illya Aronskyy, who was selected for a Salk Scholarship in recognition of outstanding academic performance and scientific research, will attend medical school in the fall.

Aronskyy, who graduated from the Weissman School of Arts and Sciences with a double major in psychology and natural sciences, also won the “Outstanding Research Paper” award. His honors thesis paper analyzed the relationship between cytoskeletal dynamics and mitochondrial metabolism in Amyotrophic Lateral Sclerosis.

Salk Scholarship winners receive a total of $8,000 over the course of four years to help defray the cost of study for M.D. and D.O. degrees, as well as doctoral degrees in biomedical sciences. This fall, Aronskyy will attend the Icahn School of Medicine at Mount Sinai in New York City.

As an undergraduate, Aronskyy felt unsure of a career path. He considered economics, history, or even psychology -- with no thought of medicine in the mix.

But two factors set the course of Aronskyy’s future: his mother’s accident and a Weissman professor.

While he was a high school senior, his mother was hit by a car and underwent surgery in critical condition. For Aronskyy, it was a life-altering event.

He recalls his mother barely able to move without assistance in the weeks and months following. Yet, watching the doctor’s “persistence and dedication” to transform his mom back into her “energetic self” was unforgettable.

“Seeing mom’s improvement and the challenges she was overcoming thanks to her medical support inspired me to take medicine-related classes while in college and possibly one day make that difference for someone else as well,” said Aronskyy.

During the two-year experience writing his thesis, Aronskyy learned to work with cell culture, fluorescence microscopy, and then expanded the research to an in vivo fly model. Dr. Peixoto included Aronskyy’s thesis report in a grant proposal funded by the American Heart Association. Additionally, Aronskyy recently presented his report at the Biophysical Society Annual conference in May.

“I wouldn’t be where I am now without his [Dr. Peixoto] help,” Aronskyy said in an emailed statement. “He made my interest in science flourish when I took his course. He invited me into his research lab, and helped me grow not only as a researcher, but also as a person.”

Aronskyy is currently volunteering in the Intensive Care Unit at New York-Presbyterian Brooklyn Methodist Hospital and acknowledged that many challenges will arise as he ventures down his pre-med journey.

“As I started volunteering, I quickly realized just how unprepared I was,” Aronskyy said. “But I had already learned, first from my mother and her doctor and then from my own studies, that persistence pays off.

Aronskyy continued, “My dive into science and research, as well as the way medicine touched my family, taught me that what may seem intimidating or overwhelming at first may blossom to become something irreplaceable.”

“No one ever said it was going to be easy—nothing worthwhile ever is. I just have to keep working at it. I have to do it to help the sick and suffering get better and get back on track,” he said. “But I also have to do it to help myself, to broaden my own horizons, and to be able to feel proud of the work that I am doing.”

About the Jonas E. Salk Scholarship

In 1955, the Jonas E. Salk Scholarship was created by the Board of Estimate of the City of New to honor Dr. Jonas E. Salk, world-renowned scientist, developer of the first vaccine to prevent polio, and a graduate of The City College of New York.

Each year, Salk Scholarships are awarded to eight graduates of CUNY senior colleges who have been accepted by, and plan to attend, U.S. medical or graduate schools. Students are selected for the awards based on academic performance, especially scientific research conducted as undergraduates, along with their potential to make significant contributions to medical research.